CELCAA, the European Umbrella organisation representing the trade in agri-food and commodities, welcomes today Council’s decision to sign the EU-Vietnam Free Trade Agreement next 30th June. The agreement, concluded by negotiators in December 2015, confirms the EU as a world leader when it comes to supporting free and fair trade and collaboration in the area of sustainability with its trading partners. In times of rising protectionism and nationalism, the EVFTA is a positive signal towards partnership between the EU and the rest of the world.

The EU- Vietnam Free Trade Agreement will support exports of EU agri-food products to a market of 94,5 million people, with an increasing growing middle class. The agreement will help EU exporters to compete for market-share in Vietnam, as major food and agri-trade competitors from other parts of the world already benefit from the Comprehensive and Progressive Agreement for Trans-Pacific Partnership (CPTPP).

Delivering on an ambitious EU trade policy, built on a continually growing demand for high quality EU agri-food policies was the central call from the CELCAA trade conference held in Brussels on 21st March 2019. Echoing this view was Agriculture Commissioner Philip Hogan who noted the “…unsurpassed safety and quality of our products has made us the leading trader of high quality food and drink products in the world.”  His Commission colleague, Trade Commissioner Cecilia Malmström stressed “Agri-food trade is growing – and the EU’s Free Trade Agreements are contributing to its success. Agricultural products are very popular with our partners. There is growing demand for EU food and wine. Our agreements cover a third of total EU agri-food exports and more than 40% of imports. We have been improving the terms too – because the agreements we are negotiating now are not the same old business”.

Speaking for the current EU Presidency, Stefan Radu Oprea, Romanian Business Minister insisted that “”EU trade policy can enhance not only the competitiveness of EU agricultural sector, but also its resilience and its attractiveness for the young generation of farmers. We should strive to promote not only our products, but also our values. Finding the right balance and choosing the right partners for EU trade agreements covering the agri-food sector is of paramount importance”.  Speakers from the agri-food trade supported the main calls from the conference for the uptake of an ambitious European trade policy focusing on the implementation of trade deals, on a deep and comprehensive EU-UK agreement and on increasing market access in new export markets while protecting sources of supply.

The conference ‘Beyond “Trade for all”: Time to promote the benefits of agri-food trade’ coincided with the publication by CELCAA of a series of recommendations on trade. The EU agri-food trade association published its Celcaa Manifesto, stressing the need to keep ambitions for free trade high, boost opportunities for sustainable agri-food markets and growth and promote the benefits of trade, whilst at the same time seeking a greater emphasis on the communication aspects of trade agreements and the support and technical assistance given to SMEs in their efforts to access the international market.

Speaking to more than 100 representatives of EU decision-makers, Missions of third countries and industry, a number of representatives from within Celcaa membership set out their goals, aspirations and expectations for the delivery of trade policy in the next 5 years.

The EU is the main exporter and importer of agri-food products, respectively accounting for 138 and 117 billion in 2017. However, agri-food trade faces a number of challenges, including Brexit, growing protectionist policies and increased technical barriers to trade. CELCAA therefore calls for concrete measures to uptake the benefits of trade, such as the rapid conclusion of a deep and comprehensive EU-United Kingdom bilateral agreement; increased market access in key export markets; improvement of trade conditions. The international rules-based system and trade diplomacy shall also be protected by all means, while the EU negotiators should defend a level playing field amongst traders. CELCAA also believes that trade can promote sustainability, especially through predictable EU preferential trade arrangements with developing countries. Finally the high level of investment in promotion policy should be maintained, and coordination amongst public authorities and associations should be reinforced when promoting the benefits of the trade.

Opening the conference Paul Rooke, CELCAA President drew attention to the core mission of CELCAA – the engagement by trade with European decision makers and EU stakeholders to help shape an EU Trade policy, workable for business, which can positively contribute to job creation and growth in the EU.

8th December 2017
Celcaa calls to prioritise the integrity of the EU single market, at the High Level Forum for a Better Functionning of the EU Food Supply Chain. Celcaa, a member of the HLF, regrets that the topic of implementation of Regulation 1169/2011 on Food Information to Consumers and in particular the implementation of the national Country of Origin Labelling (COOL) has not been discussed in greater lengh at the HLF. Celcaa calls on the Commission to play its role of maintaining the integrity of the EU single market. Press release is available here.

16th November 2017
Celcaa, Copa and Cogeca and FoodDrinkEurope call for comprehensive EU-UK trade deal and only one set of change. Trade in agri-commodities and food and drink products represents 11% of bilateral trade flows between the EU27 and the UK. As a consequence of Brexit, unprecedented challenges and a high level of uncertainty prevails. With this in mind, the three  key food chain partners call for specific measures to mitigate as much as possible any negative impact on the sector as a result of Brexit.
Press release is available here. Statement is available here.

6th July 2017
Copa and Cogeca, CELCAA and FoodDrinkEurope welcome the announcement made on 6th July 2017 at the EU-Japan Summit on the ‘in principle’ agreement of an EU-Japan trade agreement, saying that an ambitious trade deal will have a significant positive impact on both economies. For the European agri-food chain, an ambitious deal means both a comprehensive reduction of import tariffs and non-tariff barriers to trade such as SPS barriers, and the meaningful translation into enhanced market access and trade conditions.
Press release is available here.

21st June 2017
Ahead of the EU-Mercosur third round of negotiations starting on 3rd July 2017, CELCAA highlighted its interests for a balanced agreement to the European Parliament at a breakfast – meeting co-hosted by MEP Ribeira and Caspary.
Press release is available here.

29th May 2015:
At the occasion of the 23rd Bilateral EU-Japan Summit, the EU agri-food chain organisations call for an ambitious trade deal between EU and Japan. Press release is available here.

Trade contribution to EU agricultural sector growth endorsed by high level decision-makers, at a round table organised by CELCAA at the European Parliament on 21st April- readhere. To visualise the presentations made during the event, please visitwww.celcaa.eu/events The new European Parliament takes stock of the EU agri-food trade priorities, 5th November 2014 – read here. CELCAA Document “Our Priority: Trade for a Better Market” is available here.

Join the debate ! CELCAA working session at the 2014 WTO Public Forum is on 3rd October 2014- Programme is now on-line!

CELCAA calls for a deal on Trade Facilitation at the WTO Ministerial in Bali, 2nd December 2013 – Read here

17th October 2019
Brexit: EU agri-food chain representatives welcome the deal and call for a swift ratification
Copa and Cogeca, CELCAA and FoodDrinkEurope welcome the agreement that was reached today by the European Union and the United Kingdom Chief Negotiators. This deal paves the way for an orderly withdrawal, a principle that the EU agri-food chain has been repeatedly calling for, thereby providing predictability to operators.
Read full press release

21th March 2018
Joint industry letter to Donald Tusk on EU-Vietnam Free Trade Agreement
CELCAA signed a joint industry statement to Donald Tusk, President of the European Council, urging him to consider and approve the the EU-Vietnam Free Trade Agreement (EVFTA). This agreement that will boost economic growth and promote job creation both in the EU and Vietnam. Press release available here.

21th March 2018
Brexit: the agri-food chain calls for consultation on future trade relationship
Ahead of the European Council discussion on the Brexit negotiations on 22-23 March, FoodDrinkEurope, Copa and Cogeca and CELCAA call on the EU Heads of State and governments to approve draft European Council guidelines on the future trade relationship. In particular, they welcome the stated objective of tariff-free trade in all goods sectors, and look forward to agreement on a status quo transition period, both of which are vital to operators in the food chain. Press release available here

16th November 2017
Celcaa, Copa and Cogeca and FoodDrinkEurope call for comprehensive EU-UK trade deal. Trade in agri-commodities and food and drink products represents 11% of bilateral trade flows between the EU27 and the UK. The value chain between both sides of the channel is highly integrated, with almost half of the value-added in UK’s food exports generated outside the UK being produced in the EU27. the European agri-food and drink chain would like to highlight its priorities to ensure continuity of essential EU27-UK trade in our products to mitigate as much as possible any negative impacts of Brexit on the agri-food and drink sector.
The joint statement is available here. Read the press release here.

At a high level conference organised on 24th June 2016 on Food Integrity and Authenticity by Celcaa, Euro Coop and UECBV, participants discussed and endorsed a set of recommendations. Press release is available here. Recommendations are availablehere.

CELCAA together with agri-food businesses call for a policy shift towards innovation, 6th May 2014 – Read here for the full document and here for the press release

CELCAA supports Commission proposal on the reform of the promotion Policy, but calls for improvements, 22nd January 2014 – Read here

CELCAA welcomes the adoption by the European Council of the reform of the CAP, paving the way for a more market-oriented, productive and efficient agriculture policy, strengthening the European agri-food sector as a whole, 16th December 2013 – read here

7th July 2017
AFCC Statement: CAP after 2020: fresh focus needed on sustainable food, jobs, growth and innovation, at the occasion of the DG AGRI Conference on future of CAP.
Press release is available here.

30th May 2017
Commissioner Vytenis Andriukaitis called for “all the stakeholders including farmers to work together with you and play a vital role to advance the promotion and understanding of science wherever possible,” at the COCERAL/UNISTOCK Conference on ‘Innovation in the food chain: Communicating risks, sharing experiences, seizing opportunities’, held in Poland on 30 May.
Responding to this call, Agri-Food Chain Coalition (AFCC) Chair, Roxane Feller, said that there are many innovative solutions available for both livestock and crop production, and that the promotion of science is one of the key objectives under the AFCC’s recommendations for better and smarter policy-making, outlined in the Food for Thought vision paper.
See Press Release and the strategic document ‘Food For Thoughts’.

23rd September 2014
New Agri-Food Chain Coalition, including CELCAA, calls for stronger EU policy focus on innovation, jobs and sustainability, at the European Parliament on 23rd September 2014. See  the press release and the strategic document “Food For Thoughts – a vision for unlocking the potential of agriculture and the food industry in the EU”.

Unfair is unfair, regardless of the size of the companies victims of Unfair Trade Practices
CELCAA calls the Member States, meeting on 17th September 2018 in the Special Committee for Agriculture, to support the widening of the proposed Directive to tackle Unfair Trade Practices.
All food business operators should be protected by the Directive, regardless of their size, or indeed the nature of the goods they produce or supply.
Read the press release here.

Supply Chain Initiative publishes its first Annual Report at the occasion of a conference organised on 21.01.2015 at the European Parliament. Read here the press release. Download the Annual Report here.

7th June 2019
Today is the first World Food Safety Day, following its adoption by the United Nations General Assembly in 2018. To mark the day CELCAA, Copa-Cogeca, EuroCommerce, FEFAC and FoodDrinkEurope are reiterating their commitment to delivering safe food to consumers all around the globe. 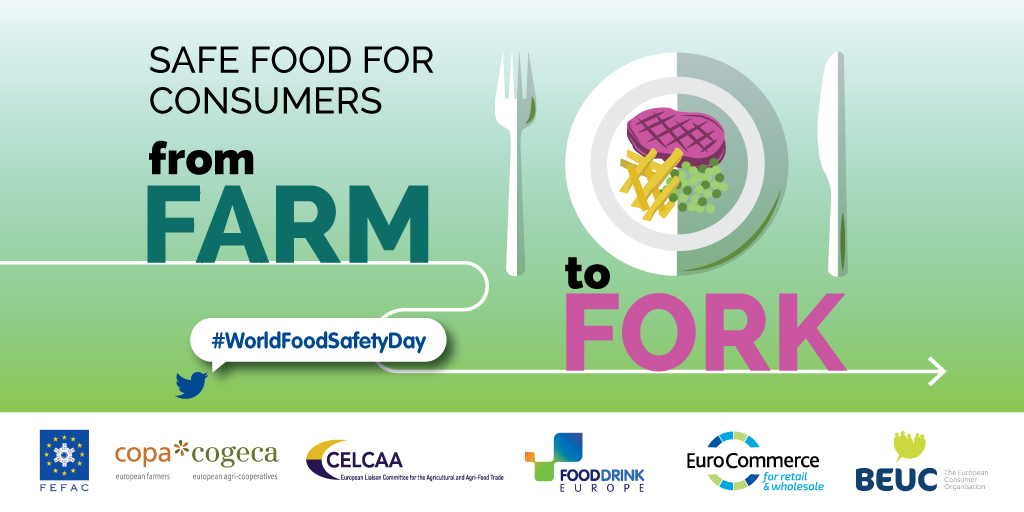 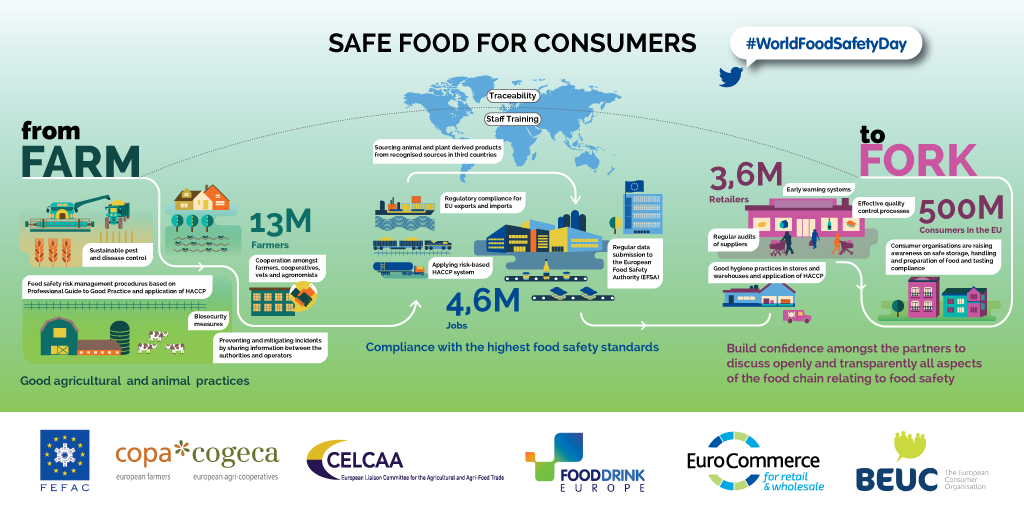